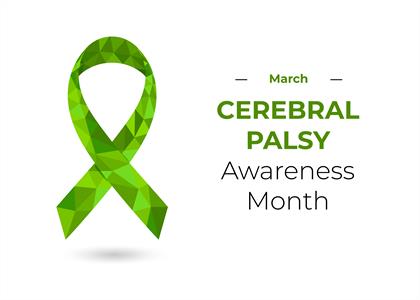 Every March, individuals and families across the United States do their part to raise awareness and funds on behalf of those affected by cerebral palsy. This challenging condition can result in poor muscular control, spastic movements, speech problems, and it can even render the affected individual unable to walk. Children and adults with cerebral palsy often require ongoing medical attention, including physical therapy, occupational therapy, speech therapy, and more. Caring for a child with cerebral palsy can be extremely challenging, which is why it’s so important to raise awareness and support for this demanding condition.

If you want to do your part this March, make sure you know what causes this condition and find out what to do if your child has cerebral palsy.

Most special causes are represented by a color significant to that condition. For example, breast cancer survivors wear pink ribbons, and childhood cancer patients sport yellow trappings. Cerebral palsy is no different, which is why children, adults, and families affected by cerebral palsy may be sporting green t-shirts, hats, ribbons, bracelets, and other paraphernalia this March.

According to the Centers for Disease Control and Prevention, cerebral palsy is the most common motor disability in childhood. An estimated 1 in every 323 children in the United States has some form of cerebral palsy, even if it is a minor case.

Cerebral palsy is a neurological condition that affects motor skills, sometimes resulting in still, spastic movements, lack of muscle control, or speech impediments. Although several different issues can cause cerebral palsy, birth injuries are often at the top of the list.

When a child is born prematurely, he or she has an increased risk of cerebral palsy. In some cases, a premature birth can be the result of medical negligence, failure to diagnose, failure to treat in a timely fashion, and so on. In other cases, cerebral palsy could be the result of misused birthing tools, like forceps and vacuums, or poor handling of the child during birth. Cerebral palsy could also be caused by maternal infection, lack of oxygen to the baby’s brain, mishandled fetal distress, C-section errors, and prolonged labor.

If a brain injury occurred during the delivery process, your doctor may have ordered MRI scans and other tests to determine the extent of your child’s injury. Another red flag is NICU attention. If a child is cared for in the NICU, he or she may have sustained serious harm before, during, or directly after the birth process. In these situations, the doctor may diagnose the baby with cerebral palsy. In other cases, a diagnosis might not come in to play until the baby misses certain developmental milestones.

Do You Have a Cerebral Palsy Birth Injury Case?

If your child was involved in a traumatic birth experience, and you think he or she may have developed cerebral palsy as a result, you may have a medical malpractice case on your hands. Our firm can work with you to determine how cerebral palsy was likely caused, and who could be at fault. If you have extensive medical bills, or if your child requires ongoing care, we want to help you seek the financial compensation you need and deserve.